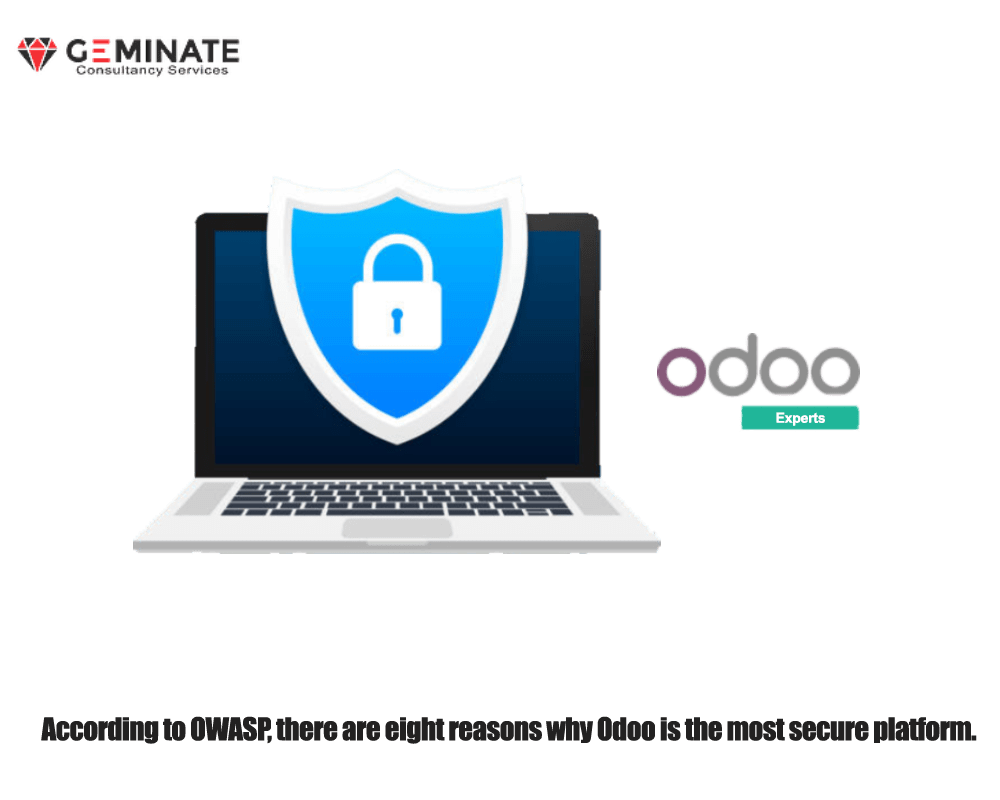 According to OWASP, there are eight reasons why

Odoo is the most secure platform.

The traditional ERP industry is hesitant to accept public discussions about security, frequently implying that it is a platform issue rather than an application issue. As a result, developing the services that consumers and suppliers desire appears to be risky and expensive.

Surprisingly, the majority of the best solutions are the most basic and least expensive. There are numerous areas of interest where an acceptable level of security can be obtained, such as networking, applications, education, culture, physical and remote access. Although not everything can be analyzed, selecting an application that can pass at least some basic checks may aid in the security of your deployment.

Because Odoo is highly customized, Odoo users and developers from all over the world are constantly reviewing the entire code-base. As a result, community bug reports are an important source of security input. As a result, we strongly advise developers to thoroughly test their programs for security flaws.

The Odoo Research and Development process includes a code review step that addresses both new and contributed code security concerns.

Odoo was created with the intention of avoiding the most common security issues.

Check out the Top OWASP Vulnerability section to see how Odoo is built from the ground up to prevent it from happening.

Odoo is a third-party company that customers and potential clients routinely evaluate for vulnerability scanning and testing. Odoo's security team receives the results and, if necessary, immediately takes action. These results, on the other hand, are kept private, the property of the members, and are not shared. Odoo also has a vibrant community of independent security researchers who constantly monitor the source code and collaborate with us to improve and strengthen Odoo's security. Our privacy policy is detailed on our disclaimer page.

According to Infosec, a security education and research firm, the average cost of a data breach in 2019 were $3.92 million, with a 279-day average duration to detect and control a breach. Don't become the next victim of one of these assaults! Recognize the significance, avoid them, and ensure solid security for your web apps. Simply put, they are critical to the success of your company.

The Open Web Application Security Project (OWASP) is dedicated to improving software security. OWASP is developing an open-source module that allows anyone to take part in projects, web communications, events, and other activities. The central OWASP concept is that all resources and information on the website are free and open to all. As a result, OWASP offers a variety of resources such as tools, videos, forums, initiatives, and conferences. In a nutshell, OWASP is a comprehensive library of online application security information backed up by the vast expertise and knowledge of open community collaborators.

Odoo, according to the Open Online Application Security Project (OWASP), poses a significant security risk for web apps in this area.

Injection flaws: Injection errors, especially SQL injection, are common in web applications. Inserts occur when the interpreter receives user-specified query or command data. The interpreter is influenced by an attacker's hostile data, which causes it to execute unwanted instructions or alter the data.

Odoo Alternative: Odoo is built on the object-relational mapping (ORM) framework, which ignores query construction by default and prevents SQL injection. SQL queries are typically generated by the ORM rather than by developers, and the arguments are always correctly encoded.

Malicious File Execution: RFI vulnerable code (including remote files) can allow an attacker to include hostile programme code, resulting in disastrous attacks such as database invasions. There is a possibility.

Odoo's Solution: The ability to include remote files is not exposed by Odoo. Authorized users, on the other hand, can change the functionality by adding custom expressions that the system evaluates. These expressions are always analyzed in a sandboxes and straightforward manner, with only authorized functions available.

Cross-Site Scripting (XSS): XSS errors occur when an application retrieves user-supplied data and sends it to a browser without any validation or encryption. An attacker can use XSS to run a script in the victim's browser, hijacking the user's session, blocking the website, and deploying the worm.

To prevent XSS, the Odoo framework effectively escapes all representations presented in views and pages. Developers must make the term "safe" clear in order for the displayed page to contain raw data.

Insecure Direct Object Reference: A direct object reference occurs when a developer publishes a URL or form parameter containing a reference to an internally implemented object, such as a file, directory, database record, or key. An attacker can gain unauthorized access to other objects by manipulating these references.

The Odoo Solution: Because Odoo access control is not implemented at the user interface level, there is no risk of internal object references being exposed in the URL. Because all requests are still routed through the data access authentication layer, an attacker cannot bypass the access control layer by modifying these credentials.

The Odoo Solution: CSRF protection is built into the Odoo Site Engine. Without this security token, the HTTP controller is unable to receive POST requests. This is the recommended method for detecting CSRF. This security token is only known and exists if the user fills out a form on the vulnerable website; without it, an attacker cannot impersonate a request.

Insecure encrypted storage: Encryption is rarely used in web applications to secure data and passwords. Aside from identity theft and credit card fraud, attackers can use unprotected data to commit additional crimes.

The Odoo Solution: Odoo uses industry-standard secure hashes for user passwords to secure saved passwords. You can use an external authentication system, such as Google authentication or Mysql, to ensure that a user's password is not stored locally.
Many applications designed to protect sensitive conversations fail to encrypt network traffic, resulting in insecure communications.

The Odoo Solution: By default, OdooCloud is HTTP-enabled. Odoo must be run behind a web server that provides encryption and proxies Odoo requests for on-premises deployments. For more secure public deployments, the Odoo Deployment Guide includes a security checklist.

Don't restrict URL access: Most apps simply protect critical functionality by ensuring that references or URLs aren't exposed to unauthorized access. An attacker could use this flaw to gain direct access to the URL and perform malicious operations.

Odoo's Solution:
Access control is not enforced at the interface level in Odoo, and security does not rely on hiding specific URLs. The URL cannot be re-used or manipulated by a hacker to bypass the access control layer. All requests must still be routed through the data access authentication layer. If the URL permits encrypted access to sensitive data, such as a specific URL used by the client to complete the order, it is digitally signed with a unique token and sent via email.

Why are security experts concerned about the Open Redirect flaw?

Certain members of the security community consider open redirects to be a security risk. For the most part, it was previously rated at the bottom of the OWASP Top 10. The primary reason for this is that the tool-tip displays a familiar site address, and the user may be unaware of the domain name change after browsing, leading them to believe the link. However, as OWASP explains, this is only one method of carrying out this phishing attack. If there is an issue other than a direct failure or damage, an attacker would be unable to attack this.

Why does Odoo consider this a flaw?

More importantly, anyone who is easily misled by misleading tool-tips may be misled into not using open redirects. An attacker will typically create a similar domain name and send an email with a phishing link to a bogus website.

Because removing the URL re-director does not prevent its use, it does not significantly improve data security. However, some of the features on which our users rely are broken or complicate Odoo's implementation.

As a result, the open URL redirect report is not considered a genuine vulnerability unless you redirect to a data: or javascript: URL to link to another actual attack, such as XSS. Please report any genuine exploitable XSS cases you come across.

Here is evidence that Odoo ERP ranks first in OWASP security and that vulnerabilities are addressed appropriately. A security flaw does not require you to work in a specific industry to be impacted; it affects all businesses. Please contact GeminateCS Odoo experts if your company has a breach and is experiencing a decrease in client satisfaction. They will walk you through the steps. They are Odoo Experts who guarantee the security of data entered into Odoo. Thank you, and have a wonderful reading experience. We look forward to hearing from you.

Reach Out To Us